A while back I wrote about a pattern we discovered in X++ code which could lead to serious data consistency issues. You can read it again and look at an example mfp wrote up here:
http://kashperuk.blogspot.dk/2016/11/tutorial-link-handling-exceptions-right.html

With the release of Platform update 5 for Dynamics 365 for Operations we should now be better guarded against this kind of issue.

Let's look at the below example (needs to be run in USMF company):


Before Platform Update 5 the result would be: As you can see, we

Now with Platform Update 5 the result will be: 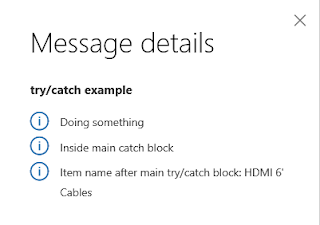 So, again, we will simply not handle the 2 special exception types (UpdateConflict and DuplicateKey) any longer in a catch-all block inside a transaction scope, you will either need to handle them explicitly or leave it up to the calling context to handle.

This will ensure we do not get into this erroneous code execution path where the transaction is not aborted, but we never handle the special exception types internally.

Hope this helps!
Posted by Ivan (Vanya) Kashperuk at 3:39 AM

Please don't forget to leave your contact details if you expect a reply from me. Thank you